Wayne Rooney has returned to MLS club DC United as head coach, saying the “exciting challenge” can continue his development as a manager.

Rooney, who played for DC United between 2018 and 2019, resigned as Derby County manager last month, ending a turbulent 17-month period in which the English club were mired in difficulties financial and relegated to Ligue 1.

He now enters another tough challenge at DC United, with the club second from bottom in the Eastern Conference on 17 points from 17 appearances following a 7-0 thrashing by Philadelphia Union in their last game.

However, Rooney – who replaces interim coach Chad Ashton – is confident he can get his former club back on track and push for the playoffs by the end of the season.

Speaking at his unveiling press conference, the former Manchester United and England star also dismissed the suggestion that the move to MLS represented a step back from the Championship.

“I’ve read a few articles in England that this could be a step back in my managerial career,” Rooney said. “I really find it a bit disrespectful to this league.

“I think the experience I’ve had at Derby County over the last 18 months has been great for my development as a coach, as a manager. And coming back here, coming back to MLS, coming back to DC United has been an exciting challenge for me, something that can develop me as a coach but also [help] the team to improve.

“I really believe that with my ability to develop players, young players – and of course we’re working hard to bring in some new players – we can really get this club back on track. It’s going to take a lot of work but that’s what I’m here to do and really improve the team.”

Rooney revealed he intended to take a break from management after leaving Derby but, despite other offers, the chance to return to Washington was one he didn’t want to pass up.

This was partly due to his relationship with the team from his playing days. There were a number of highlights during his playing career at the capital club, with Rooney scoring 25 goals in 52 appearances, including one from inside his own half. 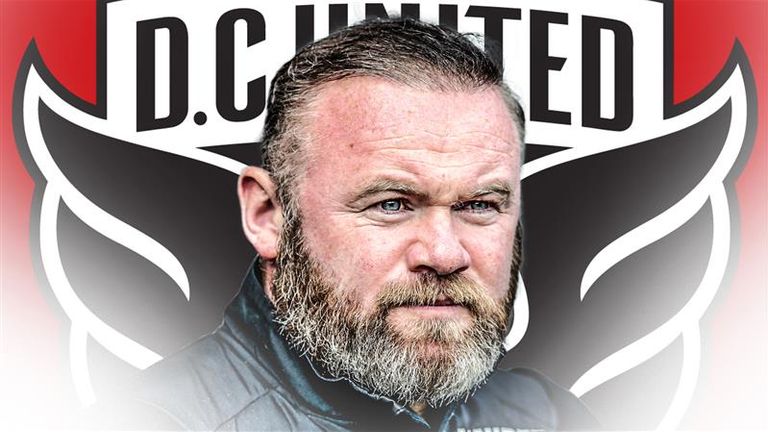 However, he spoke of the need to be “closer to those we love” in connection with his decision to cut short his stay in the United States and move to Derby as a player-coach in January 2019.

Rooney’s wife and children will stay in the UK this time and, when asked about the challenges this poses, Rooney – who was arrested for “public intoxication and the use of profanity in public in December 2018 – said he would was now in a “completely different place”. like a human being”.

“There were actually a few other clubs, both in England and in Europe, who got in touch and my plan after Derby was to take a little break and then see what happened,” Rooney said. “But once my agent called me and said DC had come over and asked if it was a possibility for me to come in, it was really quite quick, within 24 hours.

“I spoke to my wife and said there was this opportunity to return to DC as a coach and I’m probably ready to go there and do it now. Of course, if my wife doesn’t didn’t want me to go and if she said ‘I don’t, ‘I don’t want to go and I don’t want you to go’, it would have been different, but I felt ready.

“I’m in a completely different place as a human being than I probably was four years ago when I was here. I’m fully committed to bringing out the best in myself, the players and the team. team. I’m ready to get to work and bring success back to this club.”

Jason Levien and Steve Kaplan, co-chairmen of DC United, said in a statement: “Wayne is a footballing legend and one of the most exciting and dynamic managers in our sport. He has already proven himself in his young coaching career, that he knows how to lead a group in adversity.

“He has an understanding of our league and what it takes to succeed in Major League Soccer thanks to his two-year stint with us as a player. The passion he showed wearing the black and red electrified our city and our club and we are delighted to welcome him back as head coach.”