To celebrate 30 years of the Premier League, Athleticism pays tribute to the 50 greatest individual performances in its history, as voted on by our writers. You can read Oliver Kay’s introduction to our Golden Games series (and selection rules) here – as good as the full list of all items as you go.

Choosing 50 out of 309,949 options is an impossible task. You might not agree with their choices, you will not agree with the order. They did not do it. This is not a definitive list. It’s kinda fun, but I hope you have a little fun between now and August.

Arsene Wenger walked into the press room at Stamford Bridge, and when asked to describe what Nwankwo Kanu had just done, his face took on the same astonished look that every other witness to a goal you don’t wouldn’t have imagined if you hadn’t actually seen it. “He was on the sideline!” Wenger exclaimed in astonishment, as if trying to figure out something that didn’t seem possible.

So much about him seemed to defy belief. Apart from the technical magic that allowed him to do such wonderfully out of the ordinary things, watching him play football was very special at times because it was a miracle he was playing at all. Three years prior, as the reigning African Footballer of the Year, he was diagnosed with a serious heart defect and doctors feared for his career. Arsenal took extra care and guided him through a visit from Harley Street doctors before signing this most unusual talent. Kanu looked like he was built for the high jump, but in his gargantuan size 15 boots, his footwork was intricate enough that he probably could have painted a masterpiece with a brush between his toes.

So, for the purposes of this series, let’s round up some of the elements that elevate a performance to greatness. Let’s start by throwing a last-minute winner in the hat. Add the twisted plot of a comeback. In the background, a nasty day with pouring rain, difficult and soggy terrain, and the bitter reluctance of a local rivalry. On top of that, a match winner of rare invention and creativity. Sometimes just one of these things is enough to elevate a game. This one had it all.

There was a lot going on for Arsenal in the autumn of 1999. Kanu had signed earlier that year, and over the summer Wenger signed Thierry Henry and Davor Suker to a forward line that also included Dennis Bergkamp. The pedigree within this group of forwards was arguably as spectacular as any moment in the club’s history, including World Cup winners and Golden Boot, Champions League triumphs , English Doubles and Footballers of the Year. Although some weren’t quite at their peak (Henry was on his way out and Suker was on his way out), it was still an impressive collection. 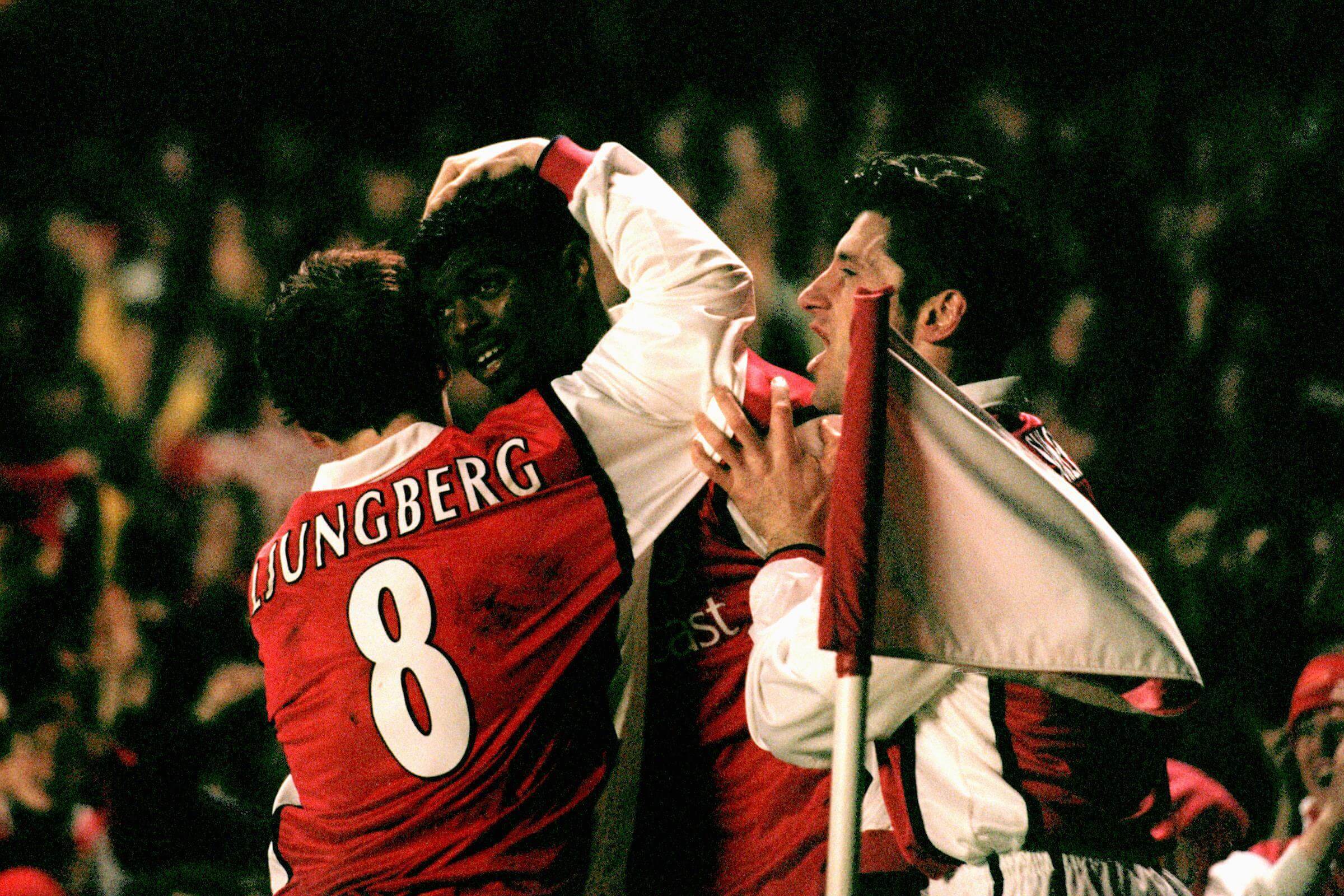 Kanu’s place in all of this was interesting. He was a regular starter during the season, although throughout his career at Arsenal he oscillated between the major role and the specialist act of impact substitute. Wenger loved the flexibility, the fact that Kanu had the ingenuity and skill to fill Bergkamp’s No.10 role, and the holding game and smarts around goal to bring others in or stand up. finish, reminiscent of the No. 9 responsibility that a player like Alan Smith used. to such a great effect.

On October 23, 1999, Arsenal faced a trip to Chelsea, which was untimely as it was the filler of a very intense Champions League sandwich. Each side’s home games, against Barcelona and Fiorentina, loomed large in the consciousness and Wenger chose his team accordingly. This was a trial campaign as Arsenal signed Wembley Stadium for their European fixtures, an experience which seemed to mount the pressure as they weren’t quite at home and their opponents tended to arrive more inspired.

Bergkamp, ​​in particular, rested for the Chelsea match. There was also no Patrick Vieira to command the central midfielder. Still, Arsenal at this time seemed to have a hex on Chelsea and were on a long unbeaten run against them.

But after starting sketchily, Chelsea got the breaks and took a 2-0 lead. Arriving so soon after Barcelona put them down with a 4-2 masterclass at Wembley, Arsenal were feeling the pressure. They were faltering both in Europe and domestically, and with 15 minutes to go Wenger was worried about Arsenal’s season. Chelsea had not conceded a Premier League goal at home all season. Wenger desperately needed someone, or something, to change the disc. But how?

The game was increasingly uncontrolled, riddled with errors, reckless. Both teams gave away the ball carelessly. For example, when Chelsea won a free-kick, which went straight into the sidelines, Dennis Wise’s irritation was written on his face. He tapped his temple, urging his teammates to concentrate. We are two zeros here. Do not be dumb.

The conditions were not trustworthy. The ground was soggy, unreliable. There was a hint of possibility ahead when Marcel Desailly played a rushing backpass to Ed De Goey. There was no one closing it in a particularly ominous way. But when the keeper came to clear as he put his foot in the ball, he swept a puddle into the penalty area. The spray swelled. It was a territory where anything could happen.

Finicky faults. Balls bouncing unpredictably off heads. A frenzy of occasional reversals. It was raining so relentlessly that Wenger, in the open canoes, wrapped a red towel over his legs. It wasn’t pretty to see from his point of view.

Arsenal’s foothold was done in a hurry. Marc Overmars’ hopeful shot grazed Kanu’s path and after a quick touch of control and a half-turn, one of those telescopic legs shot out to nudge the ball into the corner.

The second was another two-touch display of cruelty that owed much to its long limbs. The first touch redirected Overmars’ cross to clear the ball away from the Chelsea defenders, the next sent the ball to the near post.

Kanu was at the center of it all for those final 15 minutes, tormenting France’s World Cup-winning defensive pair of Desailly and Frank Lebeouf. His touch was soft, seeking to carry Arsenal to the winner.

The piece de resistance was absurd. At that point, the crowd resorted to some sort of white noise accompaniment, babbling and oohing and ahhing with everything on their nerves. Arsenal broke through Overmars and Suker, but the pass to Kanu was disappointing – leaning too wide and too deep towards the contour line. “Argh,” exclaimed commentator Martin Tyler, “Kanu didn’t want it there…”

Kanu approached and blocked Chelsea’s attempted clearance. Again, Tyler’s lyrics reflect the sentiment of the moment, his voice beginning to crack as he watched in awe. “Kanu… What is he going to do heeeeeerr?”

What he did was something very few gamers would have thought of, tried, or achieved. He was not far from his corner when De Goey rushed to meet him. Kanu slowed down time, dropped his shoulder, De Goey went one way and Kanu calmly passed the other. His upward shot from the sharpest angle flew over the heads of Desailly and Lebeouf on the line. Ruckus. Believe it or not, just then the sun came out.

Wenger struggled to explain it afterwards. “I don’t know how he scored the third goal – I thought it was impossible luck from that angle.” He whistled that Kanu’s inspired recovery in that game had him 10 years old. It was a beautiful line and we could all tell what he meant, but at the same time the beauty of this performance is that it also made you lose years, made you feel young, euphoric and full of energy. It was one of those that reminded you why you love the sport, with that whirlwind of the unpredictable that can blow you away with a smart touch, a dashing finish and an emotional switch flip.

Some of us watching got lost in the moment. I guess I should apologize. Falling short of expected standards isn’t very nice, but like a child who misbehaves but desperately tries to explain that someone else was responsible, I felt it wasn’t entirely my fault. Kanu made me do it.

So here is the scenario. British press etiquette dictates that celebrating in the freelance writers’ section is frowned upon. Even witnessing something remarkable requires a measured response – fact-checking and banter are allowed, but that’s about it. Jumping out of your seat is a major transgression. But when Kanu scored one of the boldest hat tricks to honor the Premier League, the tag evaporated and I stood to applaud. Steve Stammers, a respected gentleman of the press to my left, quickly poked me in the ribs and gave me a look. “Foot on the ball, Amy,” he said coldly. “Foot on the ball.”

Maybe that was too much. But sometimes football is too euphoric not to let go.