The visitors largely struggled to break down the league’s lowest-ranked side, with striker Sam Kerr the closest to making the breakthrough when she hit an effort from below the bar just six minutes into the game. after the start of the game. 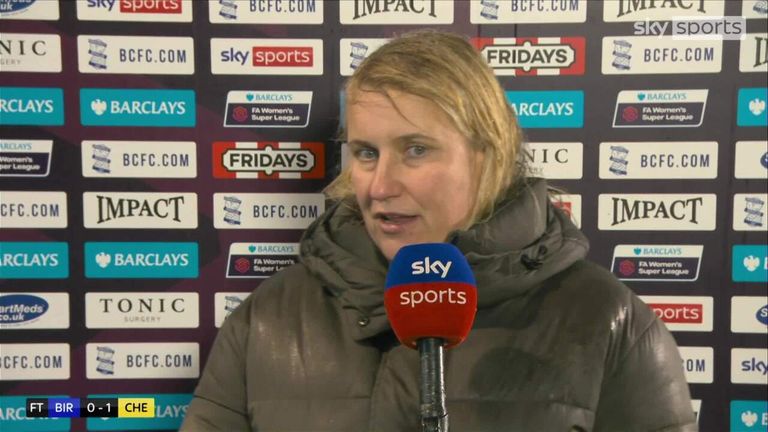 Chelsea manager Emma Hayes said her side were “nervous” in the first half of their WSL clash against Birmingham, with Pernille Harder scoring a second-half penalty to bring them closer to the title.

However, that was as close as the visitors got to open the scoring before half-time, with Birmingham continuing to frustrate their opponents in the second half, that is until 19 minutes after Lisa Robertson handled the point-blank header from Niamh Charles. give Chelsea a penalty. 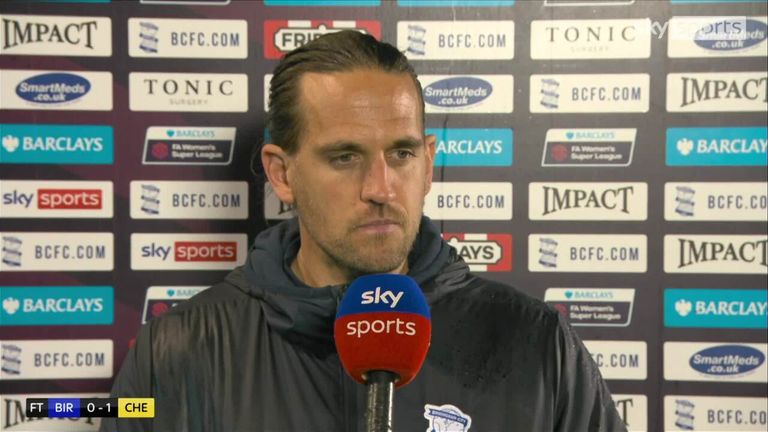 Birmingham City caretaker manager Darren Carter said he was “disgusted” to lose a penalty to WSL leaders Chelsea as his side put in a solid performance.

Harder kept it cool on the spot to send the unbeatable Emily Ramsey the wrong way as Chelsea maintained a four-point lead over Arsenal ahead of their North London derby with Tottenham at the Emirates on Wednesday night, a match they must win to take the title until the last day of the season.

Darren Carter’s side, however, remain bottom of the table and five points behind Leicester City, albeit one game less against the Foxes at Man City on Wednesday.

Spurs led early through Asmita Ale’s strike, before a late flurry of goals first saw the hosts level through Danielle Turner, only for the visitors to regain the lead from kick-off with the Josie Green’s close-range effort, but Megan Finnigan’s injury-time header gave Everton a share of the spoils.

Earlier today Vivianne Miedema scored a pair of stack drivers and Nikita Parris netted her 50th WSL goal from the penalty spot as Arsenal hammered AstonVilla 7-0 to keep the pressure on Chelsea.

Miedema scored twice with powerful shots in the opening 13 minutes to send Arsenal 2-0 down at the break, and a Rachel Corsie own goal seven minutes into the second half saw Villa crumble.

Beth Mead, Lotte Wubben-Moy and Stina Blackstenius all got on the scoresheet before Parris kicked home a 90th-minute penalty to reach half a century of league goals in the English top flight as the Gunners climbed to 49 points, one behind Chelsea.

Arsenal take on Tottenham Hotspur in midweek at the Emirates Stadium before ending their league campaign at West Ham, while Chelsea meet Birmingham, before taking on Manchester United in their final match.

Early in the day, United picked up a 3-0 win over West Ham United to move up to third place ahead of Manchester City, who beat Brighton & Hove Albion 7-2 on Saturday.

At the bottom of the table, Leicester grabbed a goalless draw with Reading for what may prove to be a vital point in the battle against relegation. The Foxes have 13 points after 21 games, five ahead of Birmingham, who have one game less.

Coventry’s great escape in the Championship 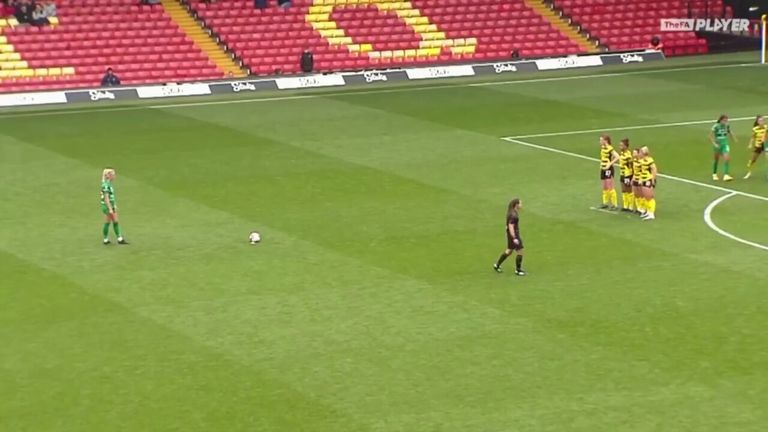 Coventry United’s Mollie Green netted a free-kick from 35 yards out with the final kick of the match to ensure her side beat Watford to relegate their opponents while keeping her side in the Championship!

There was incredible drama on the final day of the Championship with Coventry United, who were minutes away from being liquidated in January and struck with a 10-point deduction, scoring a 97th-minute winner at watford to send the team home and gain their own league status.

Meanwhile, 21,737 people were in attendance at St James’ Park for Newcastle Women vs Alnwick Town. It’s the largest crowd for a Women’s Championship game this season. Fourth-tier Newcastle repaid their fans with a 4-0 win.

Here’s how to follow the WSL on Sky Sports…

Sky Sports Digital – Follow all the latest WSL news on skysports.com and the app, including exclusive features and interviews, plus dedicated live blog coverage and live game highlights on Sky Sports. You can watch match highlights from every WSL game this season for free on Sky Sports’ digital platforms and YouTube channel.

Sky Sports News – Operating 24 hours a day, seven days a week, Barclays FA WSL fans can benefit from Sky Sports News (channel 409) for continuous editorial coverage of the league and its storylines throughout the season.

Inside the WSL – Hosted by award-winning journalist and broadcaster Jessica Creighton, Inside the WSL is a comprehensive round-up of all things Barclays FA Women’s Super League and women’s football. Airing weekly from Thursday 9 September on Sky Sports Premier League, the half-hour show will review and preview matches, include in-depth analysis and exclusive player interviews. Viewers can expect engrossing behind-the-scenes access as well as a recap of all the action on and off the pitch.

Sky Sports Social – As well as league coverage and visibility on all major Sky Sports social media channels, a new bespoke Twitter channel @SkySportsWSL will be the home of all Barclays FA WSL content on Sky Sports.

To add all Barclays FA WSL matches to your calendar, click here