Ralf Rangnick quizzed the refereeing and VAR on four key decisions in Manchester United’s 3-1 loss to Arsenal on Saturday. “We were at least unlucky with those three or four moments,” he said.

Was he right? Let’s take a look with an overview of Dermot Gallagher from Ref Watch next to Stephen Warnock…

Jadon Sancho continued one of his maze runs and sent Cedric Soares towards his own goal.

The Arsenal full-back lost his balance and stumbled on the ground before appearing to stop the ball with his hand.

Sancho appealed for what could have been a free-kick or penalty, with the incident just outside the penalty area.

However, referee Craig Pawson dismissed the appeals and there was no VAR intervention either.

Rangnick highlighted the incident after the game saying: “There was another handball problem in the first half, Jadon Sancho was involved.”

FREE TO WATCH: Highlights from Arsenal’s win over Manchester United

Gallagher said on Ref Watch: “It’s covered by law because his arm is on the ground so he’s deemed to be supporting his body and it hit him rather than him hitting the ball. I don’t think it was a scoop.

“That’s what the referee does too – support your body, hit the arm and they don’t give a penalty.”

However, Warnock disagreed, explaining, “I thought it was a pen. It doesn’t matter if you come down and get off balance, it’s your fault that you can’t keep your balance.

“If he doesn’t, Jadon Sancho is on goal. It prevents a Man Utd chance. I couldn’t believe it when I saw it, I thought it was a penalty.

“When I was playing, if I go down and the ball hits my hand, I’m petrified that I gave away a penalty. It supports you, but I don’t see you.”

Manchester United had the ball in the back of the net in the 58th minute when Victor Lindelof sent the ball past Cristiano Ronaldo, who swept eight yards out for what he thought was his second goal of the game.

Initially he looked offside, but VAR checked the incident, and on second viewing it was a closer call than everyone thought.

Ben White’s foot was close to play the Portugal international but, after the lines were drawn in the footage, an offside was signaled.

However, Rangnick also highlighted the decision in his post-match press conference, and the German was adamant that Ronaldo was in on it.

He said: “Cristiano’s second goal wasn’t offside and you can even see it from that full perspective exactly on one line. I just saw it right after the game and if that’s the right picture, and I guess they showed me the right picture, you could see it, it was clearly a line on a line.

Has Elanga been denied a penalty?

In what turned out to be a busy day for referee Pawson, Anthony Elanga came in behind Nuno Tavares, who ended up on the wrong end. The left-back got a little too tight against Elanga, who fell in the penalty area, but the referee again dismissed United’s appeals and VAR stayed with the decision on the pitch.

Again, Rangnick questioned the decision: “Anthony Elanga was arm in arm with [Tavares], the other player with him. At least, also questionable.” 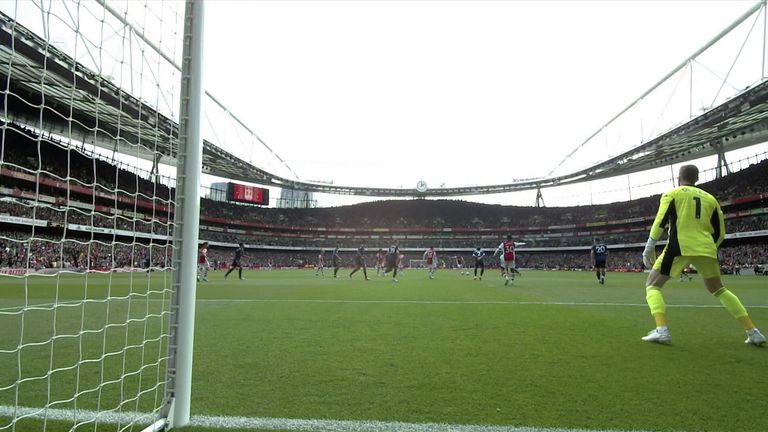 The Ref Watch team discuss whether Eddie Nketiah, who was in an offside position, was damaging David De Gea’s vision ahead of Granit Xhaka’s goal.

“Their third goal was clearly offside,” a disgruntled Rangnick said after the game.

Granit Xhaka unleashed a 25-yard strike with power and precision, and the ball flew past David de Gea and into the bottom corner to spark wild celebrations at the Emirates Stadium.

However, footage shows Eddie Nketiah standing in an offside position but was blocking the view of the Man Utd goalkeeper? The goal stood, but, again, Rangnick was firm with his sights.

He added: “I spoke to David de Gea after the game and he told me he just couldn’t see the ball because Nketiah was between Granit Xhaka and himself. They checked but for some reason, they still scored the goal.”

Gallagher cleared up the grievances somewhat, explaining: “It was felt that the distance he was from the goalkeeper was too far to be in the line of sight, so they were of the opinion that he was too far.

“I think it happened earlier this season, there was a similar one with Teemu Pukki at Norwich when the goal was given so they were consistent.

But Warnock agreed with Rangnick, adding: “I think it’s offside. It’s in the eye line, I don’t think distance matters. If De Gea is to take that step and adjusting his body movement based on where he wants to move and planting his foot and playing his footwork well, I think that was offside.”

Of course, there were many more incidents that required Gallagher’s expert eye on Ref Watch.

Around the half-hour mark, Martin Odegaard picked out Bukayo Saka, who was tackled to the ground inside the box before the ball fell on Nketiah, who brought the ball home.

Arsenal’s celebrations were initially cut short as the effort was ruled out for offside by VAR, but tech then reviewed the challenge on Saka by Alex Telles.

Referee Craig Pawson was sent to the pitch monitor and eventually awarded Arsenal the penalty, Saka stepping up once more as he had at Chelsea on Wednesday night to head home.

Gallagher said: “What’s interesting about it is that the referee always thought it was a penalty, but he was playing advantage because he thought Nketiah would score.

“Because he was offside he couldn’t score so he came back. VAR sent him to the monitor to check if it was a penalty and he gave it away, but they are of the opinion that it was still a foul and they were just playing on it.”

Warnock added: “It was great that the process was done correctly by VAR because as soon as you see that tackle coming in you think it’s a penalty. That’s clear too, so a very good decision.”

Man Utd could also have finished the game with ten men after a stinging tackle from Bruno Fernandes on Nuno Tavares.

Gallagher criticized the midfielder – who missed a penalty during the game – saying: “Why would you do that? VAR looked at it and supported the referee, but I think it’s a red card because ‘It’s so late… He’s really lucky.”